Thatching is the oldest of all the building crafts still practised in the British isles. Thatch had no rivals except for turf or sods until the mass use of stone, slate or burnt clays were introduced by the Romans.

Originally the Thatcher would of used local wild thatching material such as reeds, rushes, broom, heather and bracken, this was until the cultivation of cereals like wheat, barley and rye straws. Now the main materials are wheat reed, water reed and long straw. 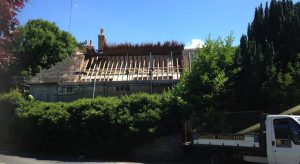 Unfortunately these days long straw is not used as often as it should be. Over two hundred years ago most properties, especially in the southern counties of the UK would have been long straw but the life span of long straw is not as long as combed wheat or water reed. In this day and age there are two types of Thatcher’s a modern Thatcher and a traditional Thatcher. I am a traditional Thatcher in every sense of the word I use traditional methods that have been passed down for centuries. I myself believe that corners should not be cut in a traditional craft and as a custodian of my craft it is my duty to not compromise the quality of more importantly the lifespan of my work.